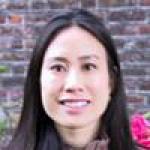 Priscilla Hsue MD, is the William Watt Kerr Professor of Medicine at the University of California, San Francisco (UCSF) and works primarily at Zuckerberg San Francisco General. Her training has included a B.S. from Carnegie Mellon University and an MD from the University of California, San Francisco. Dr. Hsue obtained her training in internal medicine and cardiology fellowship also at UCSF. Her research interest is the pathogenesis, clinical manifestations, and treatment of cardiovascular disease and inflammation in HIV-infected individuals.

Dr. Hsue leads a multidisciplinary team and oversees a large portfolio of clinical and translational studies of HIV-related cardiovascular disease. As Co-Director of the Center for Vascular Excellence at UCSF, Dr. Hsue has extensive experience in noninvasive cardiovascular imaging including assessment of carotid artery intima-media thickness, assessment of endothelial function using flow-mediated vasodilation of the brachial artery, and FDG-PET/CT to evaluate arterial inflammation. She has used all of these imaging techniques with the purpose of ascertaining the pathophysiology of HIV-related cardiovascular disease and the role of inflammation in this disease process. Dr. Hsue has published widely in the area of HIV-related cardiovascular disease and inflammation including high-impact publications in Circulation, JACC, JAMA Cardiology, and AIDS. Dr. Hsue established the HIV Cardiology Clinic at San Francisco General Hospital and is one of the few cardiologists internationally with clinical as well as research expertise in this area. She has led numerous studies of anti-inflammatory agents, immunotherapeutic and lipid lowering trials in the setting of HIV, rheumatoid arthritis and atherosclerosis. Dr. Hsue has had continuous NIH funding since 2005 and is PI, co-PI, and co-investigator on numerous NIH-funded grants, was Chair of the Clinical and Integrative Cardiovascular Science Study Section at NHLBI from 2017-2019, and also has served as a member of Office of AIDS Research Advisory Council at the NIH. She was elected into the American Society of Clinical Investigation in 2013 and the Association of University Cardiologists in 2016. Dr. Hsue has mentored numerous medical students, residents, fellows, and junior faculty and is co-PI of a K12 award from NHLBI to train and mentor researchers in HIV-related heart, lung, and blood disease.